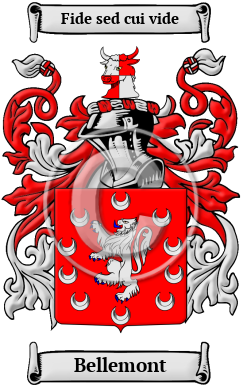 The surname is one of the many names that the Normans brought with them when they conquered England in 1066. The Bellemont family lived in Dorset and Gloucestershire. The geographical derivation of the name, however, does not stem from these locations, but relates to numerous areas in France, which are so named.

Early Origins of the Bellemont family

The surname Bellemont was first found in Dorset and Gloucestershire, where they had been granted lands by King William after the Norman Conquest in 1066.

Early History of the Bellemont family

Another 46 words (3 lines of text) are included under the topic Early Bellemont Notables in all our PDF Extended History products and printed products wherever possible.

Migration of the Bellemont family to Ireland

Some of the Bellemont family moved to Ireland, but this topic is not covered in this excerpt. More information about their life in Ireland is included in all our PDF Extended History products and printed products wherever possible.

Migration of the Bellemont family

Some of the first settlers of this family name or some of its variants were: John Beamond who settled in Virginia in 1635; Andrew Beaumont settled in New England in 1805; Richard Beamond settled in New Jersey in 1664.