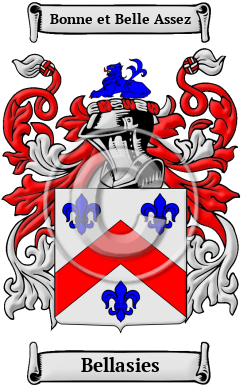 Early Origins of the Bellasies family

The surname Bellasies was first found in Durham, where they "gave their name to Bellasis,- more commonly Bellas - which 'they held from a period little later than the Conquest.' It is believed to have been a Roman station, and is now 'a farmhold, with stone walls of great thickness, and the remains of a regular moat, the usual defence of manor houses of the second class in a level country.' During the thirteenth century-probably before 1272 John de Bellasis surrendered the estate to the Prior and Convent of Durham, in exchange for Henknowl, near St. Andrew's, Auckland." [1]

Early History of the Bellasies family

More information is included under the topic Early Bellasies Notables in all our PDF Extended History products and printed products wherever possible.

Migration of the Bellasies family