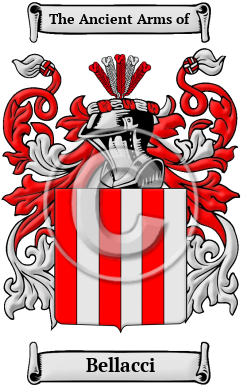 Early Origins of the Bellacci family

The surname Bellacci was first found in the city of Verona, where earliest records are found in 1279 with Vivaldo and Filippo Bellanda, city councilors, and with the Bellani family who were well in known for their peace-making efforts. Jacobus de Belviso (c. 1270-1335) was an Italian jurist from Bologna.

Early History of the Bellacci family

This web page shows only a small excerpt of our Bellacci research. More information is included under the topic Early Bellacci History in all our PDF Extended History products and printed products wherever possible.

Prominent among members of the family was Gualtieri di Bellante, a Baron and castle owner in Abruzzo in the 13th century. Members of the Belloni family in Venice were noblemen, knights, military captains, and politicians around the same time. Tommaso Bellacci, a monk in Florence was born in 1370. Bartolomeo Bellano, born in Padua in 1435, was a sculptor. Lucio Bellanti was a doctor and astrologer in Siena around 1475. Andrea Bellanti was a nobleman and banker in Siena in the 15th century. Alvise Bellacati was a famous doctor in Padua. Giovanni Bellacera was Baron of Regalmigieri in 1418. Ottone Belloni...
Another 248 words (18 lines of text) are included under the topic Early Bellacci Notables in all our PDF Extended History products and printed products wherever possible.

Bellacci migration to the United States +

Early North American immigration records have revealed a number of people bearing the name Bellacci or a variant listed above:

Bellacci Settlers in United States in the 20th Century