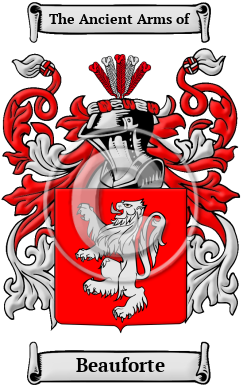 The Beauforte surname is derived from a place name. As such it is categorized as a local surname, first used where the original bearer of the name lived, held land, or was born. In France, hereditary surnames were adopted according to fairly general rules and during the late Middle Ages, names that were derived from localities became increasingly widespread. The place name Beaufort is derived from the Old French words "beau," which means "beautiful," and "fort," which means "strong," but which also refers to a military fort.

Early Origins of the Beauforte family

The surname Beauforte was first found in Savoy (French: Savoie) in the Rhône-Alpes region of the French Alps, where the family has held a family seat since ancient times.

Early History of the Beauforte family

Notable in the family name at this time was John Beaufort (1373-1410), 1st Marquess of Somerset, 1st Marquess of Dorset, later only 1st Earl of Somerset, first of the four illegitimate children of John of Gaunt, 1st Duke of Lancaster, and his mistress Katherine Swynford, later his wife, Constable...
Another 49 words (4 lines of text) are included under the topic Early Beauforte Notables in all our PDF Extended History products and printed products wherever possible.

Migration of the Beauforte family