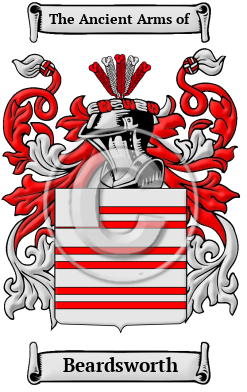 Early Origins of the Beardsworth family

The surname Beardsworth was first found in Cumberland, where they held a family seat from very ancient times. This name has undergone many changes throughout the centuries. Conjecturally, the family name emerged from Birdswald, a Clan seated on Hadrian's Wall in Cumberland, at the station known as Amboglanna. The name was corrupted into Birdoswald, Birdwood, Birdworth, Birdswood, and Birdsworth.

Early History of the Beardsworth family

This web page shows only a small excerpt of our Beardsworth research. Another 73 words (5 lines of text) covering the year 1603 is included under the topic Early Beardsworth History in all our PDF Extended History products and printed products wherever possible.

Standards against which to judge the accuracy of spellings and translations did not yet exist in the Middle Ages. Spelling variations in names dating from that era, are thus, an extremely common occurrence. Beardsworth has been recorded as Birdoswald, Birdwald, Birdweld, Birdwell, Birdwood, Birdworth, Birdswood, Birdsworth, Beardwall, Beardwell, Berdwall, Berdwell, Beardwood, Beardworth and many more.

More information is included under the topic Early Beardsworth Notables in all our PDF Extended History products and printed products wherever possible.

Migration of the Beardsworth family

The New World was far from the oppressive regime of the old country. It was a place where there was more land than people and political and religious freedom were far easier to come by. Many Scots even got the chance to fight for their freedom in the American War of Independence. In recent years, interest in this heritage has been generated by Clan societies and regular highland games in North America. An examination of early immigration and passenger lists has revealed many people bearing the Beardsworth name: Matthew Beardwood who settled in Philadelphia, Pennsylvania in 1856.

Historic Events for the Beardsworth family +