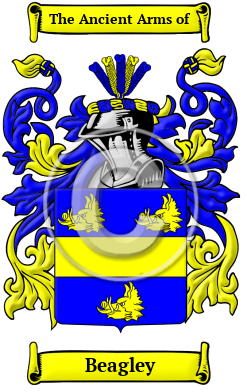 All Irish surnames have a unique and often romantic meaning. The name Beagley originally appeared in Gaelic as O Beaglaoich where beag means little, and laoch means hero. First Anglicized as O'Begley, it now appears mostly as Begley, and occasionally Bagley.

Early Origins of the Beagley family

The surname Beagley was first found in the counties of Cork and Donegal (Irish: Dún na nGall), northwest Ireland in the province of Ulster, sometimes referred to as County Tyrconnel, where they held considerable territories as an important Irish sept directly descended from the line of the Heber Irish Kings.

Early History of the Beagley family

This web page shows only a small excerpt of our Beagley research. Another 112 words (8 lines of text) covering the years 1172, 1732, and 1890 are included under the topic Early Beagley History in all our PDF Extended History products and printed products wherever possible.

Names during the Middle Ages were often recorded under several different spelling variations during the life of their bearers. Literacy was rare at that time and so how a person's name was recorded was decided by the individual scribe. Variations of the name Beagley include Begley, Beegley, Beeghley, Begly, Begeley, Begely, Beagley and many more.

Another 27 words (2 lines of text) are included under the topic Early Beagley Notables in all our PDF Extended History products and printed products wherever possible.

Beagley Settlers in Australia in the 19th Century