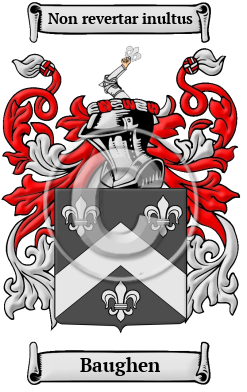 The surname Baughen is derived from the Welsh words fychan, vychan, and bychan, which all mean small or little. The name was sometimes used to distinguish the younger of two bearers of the same personal name; and in other instances, it may have been a nickname, applied ironically, to a tall person.

Early Origins of the Baughen family

Howel Vychan (Howel the Little) (d. 825) was a Welsh prince, said to have been son of Rhodri, a reputed descendant of Cunedda and king of Gwynedd or North Wales. [1]

Later, Vychan (Vaughan the Little) (fl 1230-1240), was a Welsh statesman and warrior who seems to have been the most trusted counsellor of Llewelyn ab Iorwerth. "In 1231, he signed a truce between Henry III and Llewelyn. In legendary history Ednyved is very famous, and stories are told how he slew three English chiefs in a hard fight. He became the ancestor of many leading Welsh families, and among them of the house of Tudor. He is said to have married, first, Gwenllian, daughter of the Lord Rhys of South Wales, and, secondly, the daughter of Llywerch ab Bran. By each of these ladies he had numerous offspring." [1]

Early History of the Baughen family

Compared to other ancient cultures found in the British Isles, the number of Welsh surnames are relatively few, but there are an inordinately large number of spelling variations. These spelling variations began almost as soon as surname usage became common. Scribes or priests would spell the names as they heard them, causing many different variations. Later, many Welsh names were recorded in English. This transliteration process was extremely imprecise since the Brythonic Celtic language of the Welsh used many sounds the English language was not accustomed to. Finally, some variations occurred by the individual's design: a branch loyalty within a family, a religious adherence, or even patriotic affiliations were indicated by spelling variations of one's name. The Baughen name over the years has been spelled Vaughan, Vaughn and others.

Prominent amongst the family during the late Middle Ages was Sir Griffith Vaughan or Vychan (d. 1447), Welsh soldier, was son of Griffith ap Leuan; Edward Vaughan (d. 1522), Welsh Bishop of St. David's; Sir Henry Vaughan the elder (1587?-1659), a Welsh politician, Member of Parliament for Carmarthen (1621-1629), Member of Parliament for Carmarthenshire (1640-1644), High Sheriff of Carmarthenshire (1620); Robert Powell Vaughan (ca. 1592-1667), an eminent Welsh antiquary and collector of manuscripts; Thomas Vaughan (1621-1666), a Welsh philosopher, best remembered for his writings in the area of natural magic; Sir John Vaughan SL (1603-1674), of Trawsgoed, a Welsh justice from...
Another 133 words (10 lines of text) are included under the topic Early Baughen Notables in all our PDF Extended History products and printed products wherever possible.

Migration of the Baughen family to Ireland

Some of the Baughen family moved to Ireland, but this topic is not covered in this excerpt.
Another 59 words (4 lines of text) about their life in Ireland is included in all our PDF Extended History products and printed products wherever possible.

Migration of the Baughen family