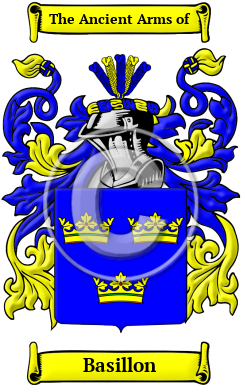 Early Origins of the Basillon family

The surname Basillon was first found in Burgundy (French: Bourgogne), an administrative and historical region of east-central France where the family has been a prominent family for centuries, and held a family seat with lands and manor. The family were well established in the region of Dijonnais and several members of the family distinguished themselves through their contributions toward the community in which they lived and were rewarded with lands, titles and letters patent confirming their nobility. One of the more interesting records found was that of Pierre Basile (died April 6, 1199), also named Bertran de Gurdun and John Sabroz, a French boy famous for shooting King Richard I of England with a crossbow at the siege of Châlus-Chabrol on March 25, 1199. Apparently, King Richard was not mortally wounded by Basile's bolt but the wound resulted in gangrene which lead to the king's demise. Before the king's death King Richard ordered that Basile suffer no punishment but after Basile was hanged for his actions.

Early History of the Basillon family

This web page shows only a small excerpt of our Basillon research. Another 139 words (10 lines of text) covering the years 1522, 1624, 1677, 1660, 1617 and 1684 are included under the topic Early Basillon History in all our PDF Extended History products and printed products wherever possible.

Another 40 words (3 lines of text) are included under the topic Early Basillon Notables in all our PDF Extended History products and printed products wherever possible.

Migration of the Basillon family