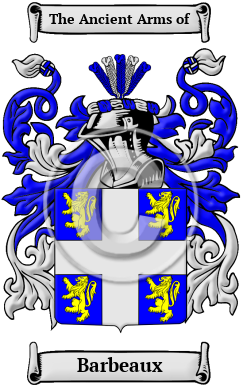 The name Barbeaux dates back to the days of Medieval France, in the region of Brittany. It is derived from their residence in Barbeau, a place in the province of Brittany (French: Bretagne).

Early Origins of the Barbeaux family

The surname Barbeaux was first found in Brittany where they held a family seat from ancient times.

The family prospered and grew and eventually a branch of the family formed in England with which Brittany was aligned. During the 15th and 16th centuries, after the reunion of Brittany with France, the family branched into Provence and Lorraine. In Lorraine, they held a family seat at Augueville where they are recorded with lands, estates, and manors on the 7th of February in 1553.

André Barbeau was born in 1641 in Vendée, France. He travelled to the New World in 1662 and after arriving in Canada he married Marie Jaudon on 12th August 1669. After his first wife passed away, André remarried to Marie Gagne in 1686. They settled in Charlesbourg, Quebec until the time André's death on 29th September 1699. [1]

Early History of the Barbeaux family

This web page shows only a small excerpt of our Barbeaux research. Another 82 words (6 lines of text) covering the years 1553, 1696, 1698, and 1763 are included under the topic Early Barbeaux History in all our PDF Extended History products and printed products wherever possible.

More information is included under the topic Early Barbeaux Notables in all our PDF Extended History products and printed products wherever possible.

Migration of the Barbeaux family

France was active as a cultural leader in the early 16th century. One particular area in which they lead was the exploration of the New World. The explorers, like Jacques Cartier in 1534, led the way to North America. Champlain, in 1608, made the first of twenty voyages to France to attract settlers and brought the first migrant in 1617. By 1675, there were 7000 French in Quebec, and the French Acadian presence in the Maritimes had reached 500. The French founded Lower Canada, thus becoming one of the two great founding nations of Canada. The family name Barbeaux has made many distinguished contributions in France and New France to the world of science, culture, religion, and education. Amongst the settlers in North America with this distinguished name Barbeaux were Jacques Barbeau who married Jeanne Garnier in 1679 in Auber; Joseph Barbeau who married Elisabeth Charbonneau in 1690; Simon Barbeau who married Anne Badeau in 1693 in Chambalon Qué.