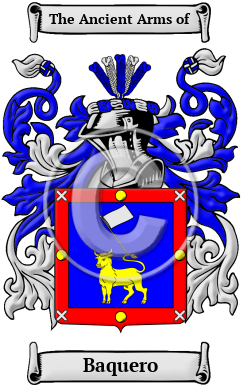 The origins the old family name Baquero can be found within medieval Spain. While the patronymic and metronymic surnames, which are derived from the name of the father and mother respectively, are the most common form of a hereditary surname in Spain, occupational surnames also emerged during the late Middle Ages. The Germanic speaking Visigoths, who conquered Spain from the mid-5th to 8th centuries, and the Arabic and Muslim Moors, who conquered the Spanish homeland from the 8th to 12th centuries, influenced Spanish names. Since Spain was periodically dominated by both of these nations in its past, it shared much in common with both the Visigoths and the Muslims in the occupations they described. Many people, such as the Baquero family, adopted the name of their occupation as their surname. However, an occupational name did not become a hereditary surname until the office or type of employment became hereditary. The surname Baquero was an occupational name for a farmer or cowherd.

Early Origins of the Baquero family

The surname Baquero was first found in Castile, an important Christian kingdom of medieval Spain.

Early History of the Baquero family

This web page shows only a small excerpt of our Baquero research. Another 108 words (8 lines of text) covering the year 1228 is included under the topic Early Baquero History in all our PDF Extended History products and printed products wherever possible.

Another 31 words (2 lines of text) are included under the topic Early Baquero Notables in all our PDF Extended History products and printed products wherever possible.

Baquero migration to the United States +

Baquero Settlers in United States in the 19th Century