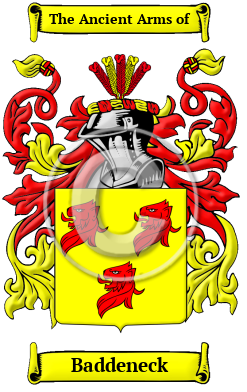 The Pictish clans of ancient Scotland were the ancestors of the first people to use the name Baddeneck. It comes from in the lands of Badenoch, in Inverness.

Early Origins of the Baddeneck family

The surname Baddeneck was first found in Inverness-shire (Gaelic: Siorrachd Inbhir Nis) divided between the present day Scottish Council Areas of Highland and Western Isles, and consisting of a large northern mainland area and various island areas off the west coast, the shire was anciently both a Pictish and Norwegian stronghold. The Lord of Badenoch was a magnate who ruled the lordship of Badenoch in the 13th century and early 14th century. It is generally believed that lordship was created out of the territory of the Meic Uilleim, after William Comyn, jure uxoris Earl of Buchan, Justiciar of Scotia and Warden of Moray who defeated Gille Escoib MacUilleim. After the death of John III Comyn, Lord of Badenoch (d. 1306), the lordship was taken into royal hands.

Early History of the Baddeneck family

This web page shows only a small excerpt of our Baddeneck research. Another 84 words (6 lines of text) covering the years 1454, 1460 and 1521 are included under the topic Early Baddeneck History in all our PDF Extended History products and printed products wherever possible.

Translation has done much to alter the appearance of many Scottish names. It was a haphazard process that lacked a basic system of rules. Spelling variations were a common result of this process. Baddeneck has appeared Badenach, Badenack, Badenoch, Badenock, Badinoch, Badynoch, Badyenoch, Baidenach and many more.

More information is included under the topic Early Baddeneck Notables in all our PDF Extended History products and printed products wherever possible.

Migration of the Baddeneck family

Many Scots left their country to travel to the North American colonies in search of the freedom they could not find at home. Of those who survived the difficult voyage, many found the freedom they so desired. There they could choose their own beliefs and allegiances. Some became United Empire Loyalists and others fought in the American War of Independence. The Clan societies and highland games that have sprung up in the last century have allowed many of these disparate Scots to recover their collective national identity. A search of immigration and passenger ship lists revealed many early settlers bearing the Baddeneck name: John Badenack who settled in Virginia in 1690.