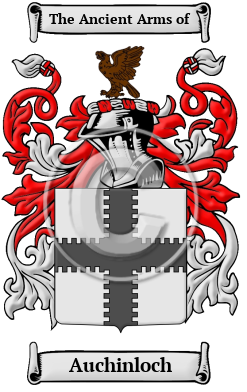 The surname Auchinloch was first used in the Scottish/English Borderlands by an ancient Scottish people called the Strathclyde- Britons. It was a name for someone who lived in the barony of Auchinleck in Ayrshire or from Affleck in Angus. [1]

Early Origins of the Auchinloch family

The surname Auchinloch was first found in Ayrshire and Angus. "In 1370 the lands of 'le Greynryg et de le Tathys' were resigned to Kelso Abbey by Adam de Aghynlek, Thomas of Awqwhynleke in 1436 witnessed a charter of lands in Peeblesshire, Adam Auchinlek had a safe conduct to travel in England in 1451, Andrew Athelek and James Athelek of Scotland petitioned for safe conducts in 1464, and in 1486 William Achlek appears as a friar preacher in Aberdeen." [2]

Early History of the Auchinloch family

This web page shows only a small excerpt of our Auchinloch research. Another 132 words (9 lines of text) covering the years 1296, 1311, 1464, 1306 and 1499 are included under the topic Early Auchinloch History in all our PDF Extended History products and printed products wherever possible.

Spelling and translation were hardly exact sciences in Medieval Scotland. Sound, rather than any set of rules, was the basis for spellings, so one name was often spelled different ways even within a single document. Spelling variations are thus an extremely common occurrence in Medieval Scottish names. Auchinloch has been spelled Affleck, Athlyk, Athinkel, Auchlek, Athlek, Achleck, Achinfleck, Afleck, Authinlek and many more.

Another 47 words (3 lines of text) are included under the topic Early Auchinloch Notables in all our PDF Extended History products and printed products wherever possible.

Migration of the Auchinloch family