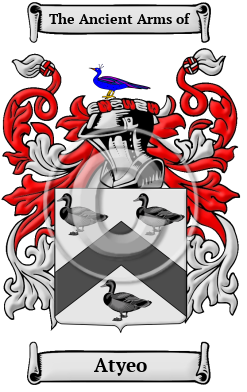 The Atyeo surname comes from the Old English word "ea," or "yo," in Somerset and Devon dialects, which meant "river" or "stream." It was likely originally a topographic name for someone who lived near a stream.

Early Origins of the Atyeo family

The surname Atyeo was first found in Devon where they held a family seat from very ancient times, at Hempton Sachville. "Tre-Yeo [in the parish of Launcells, Cornwall] was an ancient seat belonging to the family of Yeo." [1]

Early History of the Atyeo family

This web page shows only a small excerpt of our Atyeo research. Another 74 words (5 lines of text) covering the years 112 and 1120 are included under the topic Early Atyeo History in all our PDF Extended History products and printed products wherever possible.

Spelling variations of this family name include: Yeo, Yeoh, Yea, Yeoman, Attyea and others.

More information is included under the topic Early Atyeo Notables in all our PDF Extended History products and printed products wherever possible.

Migration of the Atyeo family