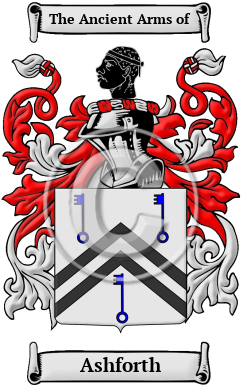 The proud Ashforth family originated in Cornwall, a rugged coastal region in southwestern England. In early times, people were known by only a single name. However, as the population grew and people traveled further afield, it became increasingly necessary to assume an additional name to differentiate between bearers of the same personal name. The manner in which hereditary surnames arose is interesting. Local surnames are derived from where the original bearer lived, was born, or held land. The Ashforth family originally lived at Ayshford, in Cornwall. The Ashforth surname was also derived from the Old English words aesc and ford which meant a ford where ash trees grew. [1]

Early Origins of the Ashforth family

The surname Ashforth was first found in Ayshford, in the county of Cornwall, and in the County of Devon, from earliest times, and in later years a branch of the family migrated eastward to Kent. There are at least two references to the name in the Domesday Book: Aisseford and Aiseforda. Both were listed in Devon.

However we must look to Oxfordshire for the first listing of the family with a very old spelling. The Hundredorum Rolls of 1273, list John de Esseford, Oxfordshire as holding lands there at that time. [2]

Early History of the Ashforth family

This web page shows only a small excerpt of our Ashforth research. Another 63 words (4 lines of text) covering the years 1626, 1594 and 1698 are included under the topic Early Ashforth History in all our PDF Extended History products and printed products wherever possible.

Cornish surnames are characterized by a multitude of spelling variations. The frequent changes in surnames are due to the fact that the Old and Middle English languages lacked definite spelling rules. The official court languages, which were Latin and French, were also influential on the spelling of a surname. Since the spelling of surnames was rarely consistent in medieval times, and scribes and church officials recorded names as they sounded rather than adhering to any specific spelling rules, it was common to find the same individual referred to with different spellings of their surname in the ancient chronicles. Moreover, a large number of foreign names were brought into England, which accelerated and accentuated the alterations to the spelling of various surnames. Lastly, spelling variations often resulted from the linguistic differences between the people of Cornwall and the rest of England. The Cornish spoke a unique Brythonic Celtic language which was first recorded in written documents during the 10th century. However, they became increasingly Anglicized, and Cornish became extinct as a spoken language in 1777, although it has been revived by Cornish patriots in the modern era. The name has been spelled Aishford, Ashford, Ayshford, Aysford, Asford, Asseford and many more.

Another 34 words (2 lines of text) are included under the topic Early Ashforth Notables in all our PDF Extended History products and printed products wherever possible.

Ashforth migration to the United States +

A look at the immigration and passenger lists has shown a number of people bearing the name Ashforth:

Ashforth Settlers in United States in the 19th Century

Historic Events for the Ashforth family +