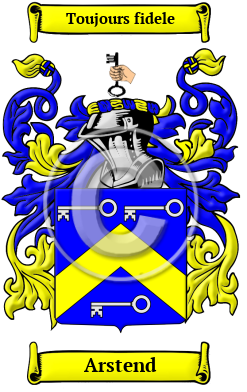 Early Origins of the Arstend family

The surname Arstend was first found in Dumfriesshire (Gaelic: Siorrachd Dhùn Phris), a Southern area, bordering on England that today forms part of the Dumfries and Galloway Council Area, where they held a family seat in both Dumfries and south of the border in Cumberland where the name was more commonly spelled Harstan or Harston.

Early History of the Arstend family

This web page shows only a small excerpt of our Arstend research. Another 100 words (7 lines of text) covering the years 1570 and 1686 are included under the topic Early Arstend History in all our PDF Extended History products and printed products wherever possible.

More information is included under the topic Early Arstend Notables in all our PDF Extended History products and printed products wherever possible.

Migration of the Arstend family

Some of the first settlers of this family name or some of its variants were: Jonathon Hardstan who landed in North America in 1750.