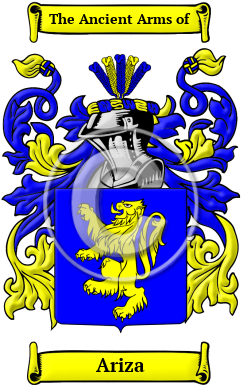 Early Origins of the Ariza family

The surname Ariza was first found in Galicia, where the descendants of the Celts and the Swabians were established.

Early History of the Ariza family

This web page shows only a small excerpt of our Ariza research. Another 104 words (7 lines of text) covering the years 1097 and 1611 are included under the topic Early Ariza History in all our PDF Extended History products and printed products wherever possible.

Spelling variations of this family name include: Arias, Arianiz, Areas, Ares, Ariz, Aris and others.

Migration of the Ariza family

Some of the first settlers of this family name or some of its variants were: Pedro Arias de Avila, who succeeded Balboa as Governor of Darien (Panama) and founded Panama City in 1519. Hernando Arias de Saavedra, of Spanish descent, often called &quot.