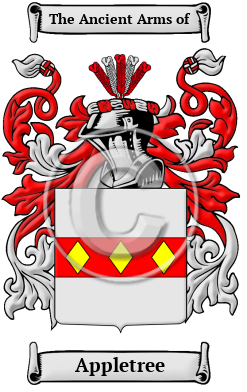 Early Origins of the Appletree family

The surname Appletree was first found in Northamptonshire at Appletree, a hamlet, in the parish of Astonle-Walls, union of Banbury, hundred of ChippingWarden, a relatively small village, the population in the late 1800s was only 92. [1] Appletree-Hall is another small village, but this one is in the parish of Wilton, Hawick district of the county of Roxburgh, Scotland. This latter village had a population of about 75 in the late 1800s. [2]

Early History of the Appletree family

This web page shows only a small excerpt of our Appletree research. Another 137 words (10 lines of text) covering the years 1510, 1600, 1556, 1557, 1455 and 1487 are included under the topic Early Appletree History in all our PDF Extended History products and printed products wherever possible.

Before English spelling was standardized a few hundred years ago, spelling variations of names were a common occurrence. Elements of Latin, French and other languages became incorporated into English through the Middle Ages, and name spellings changed even among the literate. The variations of the surname Appletree include Apeltree, Apoltree, Appletree, Apeltry, Apeltrie, Appeltry, Appoltry and many more.

More information is included under the topic Early Appletree Notables in all our PDF Extended History products and printed products wherever possible.

Appletree migration to the United States +

Appletree Settlers in United States in the 17th Century