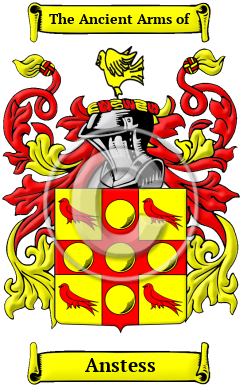 This surname was found in various counties and was derived from the Old English "anstiga" which meant "narrow or lonely track" There are multiple listings in the Domesday Book [1] including: Leicestershire (Anstige), East and West Anstey, Devon (Anestinga) Ansty, Warwickshire (Anestie), Ansty Cross, Higher Ansty, Dorset (Anesty) [2]

Early Origins of the Anstess family

The surname Anstess was first found in Warwickshire at Anstey. "This place is situated on the road from Coventry to Wolvey heath, and thence to Leicester; it was originally called Heanstige, from the Saxon hean, high, and stige, a path-way. " [3]

Significantly the same source notes that Anstey in Leicestershire was "formerly called Hanstigie or Anstige," some one can easily see exact spelling of places did not apply in ancient times. Later the more commonly used today spelling of Anstey prevailed as "in 1376, certain lands, described as 'lying in the fields of Anstey in Wolfdale,' were granted by John Lenerych, of Leicester." [3]

Early History of the Anstess family

Anstess has been spelled many different ways. Before English spelling became standardized over the last few hundred years, spelling variations in names were a common occurrence. As the English language changed in the Middle Ages, absorbing pieces of Latin and French, as well as other languages, the spelling of people's names also changed considerably, even over a single lifetime. Spelling variants included: Anstey, Anstie, Ansty, Anstay, Anstee and others.

Notables of the family at this time include John Anstis the Elder (1669-1744), was an English officer of arms and antiquarian who became Garter King of Arms in 1718. Born at St. Neots, Cornwall, 28 (or 29) Sept. 1669, he entered Exeter College, Oxford, in 1685, and was admitted to the Inner Temple in 1688. "Of a good family, and possessed of considerable fortune, Anstis was chosen one of the members for St. Germains in 1702. Although a strong Tory, he voted against the bill for the prevention of occasional conformity, which caused his name to appear among the 'tackers' in...
Another 263 words (19 lines of text) are included under the topic Early Anstess Notables in all our PDF Extended History products and printed products wherever possible.

Anstess migration to the United States +

In an attempt to escape the chaos experienced in England, many English families boarded overcrowded and diseased ships sailing for the shores of North America and other British colonies. Those families hardy enough, and lucky enough, to make the passage intact were rewarded with land and a social environment less prone to religious and political persecution. Many of these families became important contributors to the young colonies in which they settled. Early immigration and passenger lists have documented some of the first Anstesss to arrive on North American shores:

Anstess Settlers in United States in the 19th Century

Anstess Settlers in United States in the 20th Century