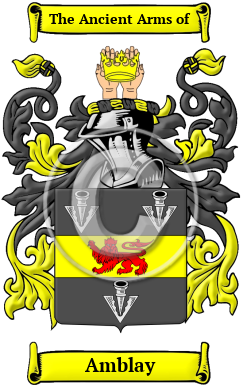 The name Amblay arrived in England after the Norman Conquest of 1066. It is a name for a person employed as an enameller, and derives from the Anglo-Norman-French amayler, of the same meaning. [1]

It is also possible that the name refers to one who is employed in a profession which involves horses, as the Old English ambler means walker, and is a technical word for the slowest gait of a horse. [2] "The surname may mean ‘keeper of the stable’" [1]

Their ancient estates were in Amblie, in Calvados in Normandy. [3]

Early Origins of the Amblay family

The surname Amblay was first found in Yorkshire where Nicholas le Aumbleour was recorded in 1307. Alexander Ambler was a Freeman of York in 1474. London records show William le Amayler there in 1303 and Robert Ambeler in 1375. Later, Simon le Amelous was listed in Somerset in 1344. [1]

The Hundredorum Rolls of 1273 included Thomas le Amblur, but no county was provided. [4]

"Ambler is an old Yorkshire name, now best represented in the West Riding, There were several of the name in Arnley about a century ago. William Ambler was mayor of Doucaster in 171, and one of the sheriffs of York in 1727 bore this name. In 1665, Captain Thomas Ambler gave £30 to the poor of Leeds. Ombler was the name of the mayor of Holderness, in the East Riding, in 1618, 1638, 1655, and 1821. The name occurred amongst the yeomen of East Hasterton in the reign of Edward VI. (D.); and going much further back we find Amblurs in the East Riding and in Lincolnshire in the reign of Edward I." [5]

Early History of the Amblay family

This web page shows only a small excerpt of our Amblay research. Another 122 words (9 lines of text) covering the years 1100, 1166 and 1924 are included under the topic Early Amblay History in all our PDF Extended History products and printed products wherever possible.

Norman surnames are characterized by a multitude of spelling variations. The frequent changes in surnames are largely due to the fact that the Old and Middle English languages lacked definite spelling rules. The introduction of Norman French to England, as well as the official court languages of Latin and French, also had pronounced influences on the spelling of surnames. Since medieval scribes and church officials recorded names as they sounded, rather than adhering to any specific spelling rules, it was common to find the same individual referred to with different spellings. The name has been spelled Ambler, Ambeller, Amblie, Anbler, Amble, Amblor and others.

More information is included under the topic Early Amblay Notables in all our PDF Extended History products and printed products wherever possible.

Migration of the Amblay family

Many English families emigrated to North American colonies in order to escape the political chaos in Britain at this time. Unfortunately, many English families made the trip to the New World under extremely harsh conditions. Overcrowding on the ships caused the majority of the immigrants to arrive diseased, famished, and destitute from the long journey across the stormy Atlantic. Despite these hardships, many of the families prospered and went on to make invaluable contributions to the development of the cultures of the United States and Canada. Early North American immigration records have revealed a number of people bearing the name Amblay or a variant listed above: Martha Ambler who settled in Virginia in 1721; John Ambler settled in Virginia in 1721; Benjamin in New York State, in 1774; with his wife, Mary, son John, and Ann, his daughter..