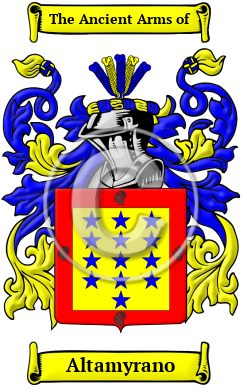 The distinguished Spanish surname Altamyrano is of toponymic origin, that is, it belongs to that category of surnames which derive their origin from the name of the place in which the original bearer of the name was born or resided. In this instance, the surname Altamyrano comes directly from Altamiros or Altamira. The place name Altamiro is formed by the combination of two Spanish words, "alta," meaning "high," and "mira," meaning "view," possibly referring to the high view observed from that topographical point.

Early Origins of the Altamyrano family

The surname Altamyrano was first found in various places located in the Spanish provinces of Vizcaya and Caceres.

Early History of the Altamyrano family

This web page shows only a small excerpt of our Altamyrano research. Another 85 words (6 lines of text) covering the years 1590, 1551, 1619, 1620, 1625 and 1715 are included under the topic Early Altamyrano History in all our PDF Extended History products and printed products wherever possible.

Spelling variations of this family name include: Altamira, Altamiros, Altamyrano and others.

Altamyrano migration to the United States +

Altamyrano Settlers in United States in the 19th Century