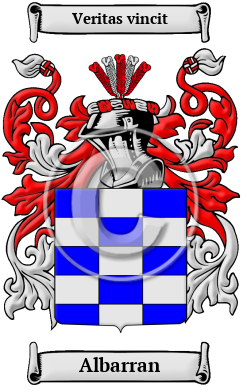 Early Origins of the Albarran family

The surname Albarran was first found in Castile, where the name originated in Visigothic times.

Early History of the Albarran family

This web page shows only a small excerpt of our Albarran research. Another 114 words (8 lines of text) covering the years 1101, 1662 and 1714 are included under the topic Early Albarran History in all our PDF Extended History products and printed products wherever possible.

Prominent among members of the family were Pedro and Garcia Alvarez, knights in the service of King Alfonso VI in 1101; Alfonso Alvarez de Villasandino and Juan Alvarez Gato, fifteenth century poets; Fadrique Alvarez de Toledo, Duke of Alba, who fought for Ferdinand and Isabella during the conquest of Granada; Hernando Alvarez de Toledo, Notary to Ferdinand and Isabella...
Another 58 words (4 lines of text) are included under the topic Early Albarran Notables in all our PDF Extended History products and printed products wherever possible.

In the United States, the name Albarran is the 13,872nd most popular surname with an estimated 2,487 people with that name. [1]

Albarran migration to the United States +

Albarran Settlers in United States in the 16th Century

Albarran Settlers in United States in the 20th Century