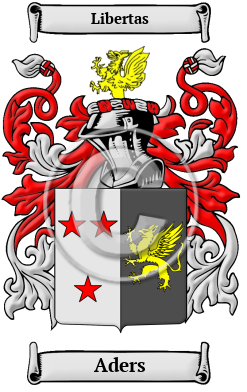 Early Origins of the Aders family

The surname Aders was first found in Silesia, where in medieval times the name Eder was closely associated to the social and political advancements of the region's feudal society. Eder became a prominent name in local affairs with the branching into other distinguished houses, some of whom played important roles in the territorial conflicts of the period.

Early History of the Aders family

This web page shows only a small excerpt of our Aders research. Another 56 words (4 lines of text) are included under the topic Early Aders History in all our PDF Extended History products and printed products wherever possible.

More information is included under the topic Early Aders Notables in all our PDF Extended History products and printed products wherever possible.

Migration of the Aders family

Some of the first settlers of this family name or some of its variants were: Alice Eden, age 17; who arrived in Salem, Massachusetts in 1637. John Edden settled in Virginia in 1642; Thomas Eden settled in Maryland in 1668; Richard Eden settled in Nova Scotia in 1749.