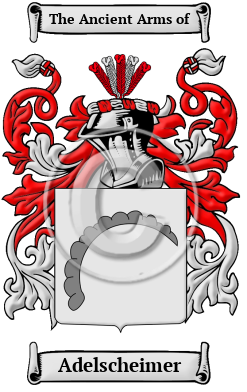 Early Origins of the Adelscheimer family

The surname Adelscheimer was first found in Wuerttemberg, where the name was closely identified in early mediaeval times with the feudal society which would become prominent throughout European history. A Phillip von Adelsheim participated in a jousting tournament at Merseburg, seat of the Saxon ruling families, in 968. Poppo von Dueren built a castle named Adelsheim near Mosbach after 1298, and took the name for his family in 1323. They possessed extensive estates in the Lower Main region, their baronial seat formerly existing in the grand duchy of Baden. The name would later emerge as a noble family with great influence, having many distinguished branches, and would become noted for its involvement in social, economic and political affairs.

Early History of the Adelscheimer family

This web page shows only a small excerpt of our Adelscheimer research. Another 83 words (6 lines of text) are included under the topic Early Adelscheimer History in all our PDF Extended History products and printed products wherever possible.

More information is included under the topic Early Adelscheimer Notables in all our PDF Extended History products and printed products wherever possible.

Migration of the Adelscheimer family

Some of the first settlers of this family name or some of its variants were: Jacques Adelsheimer, who settled in Philadelphia in 1864.