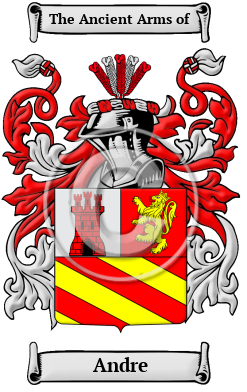 The distinguished surname Andre can be traced back to the ancient and beautiful region of Venice. The people here were known by only a single name until it became necessary for them to adopt a second name to identify themselves as populations grew and travel became more frequent. The process of adopting fixed hereditary surnames was not complete until the modern era, but the use of hereditary family names in Italy began in the 10th and 11th centuries. Italian hereditary surnames were developed according to fairly general principles and they were characterized by a profusion of derivatives coined from given names. Andre is a patronymic surname, a name derived from the father's given name. The surname Andre came from the Greek given name Andreas, which is a name that means manly. The given name Andreas is itself derived from the Greek words aner, andrós, which mean man, and by extension warrior.

Early Origins of the Andre family

The surname Andre was first found in Friuli (Venetian: Friul), an area of northeastern Italy in 1150 with the Andriotti family. This family was known for ownership of several castles in the region, and in 1210 they were made nobility.

Early History of the Andre family

Prominent among members of the family was Giorgio Andreoli (c. 1470 - 1553), Italian potter generally considered to be the most important potter of the Italian Renaissance; Iacomo Andrea (d. 1500), an Italian architect from Ferrara, beheaded for plotting against the French; Francesco Andreini, a valiant soldier in Pistoia in 1548; Ippolito Andreasi was a talented painter in Mantua in the same year; Andrea Andreani was a wood carver and printer in Mantua, and in 1584 he published a copy of one of Tiziano's works. In 1576 Giovan Battista Andreini was a popular actor in Florence; Alessandro Andreasi was made a...
Another 252 words (18 lines of text) are included under the topic Early Andre Notables in all our PDF Extended History products and printed products wherever possible.

Andre migration to the United States +

Immigrants bearing the name Andre or a variant listed above include:

Andre Settlers in United States in the 18th Century

Andre Settlers in United States in the 19th Century

Andre Settlers in Canada in the 17th Century

Andre Settlers in Canada in the 19th Century