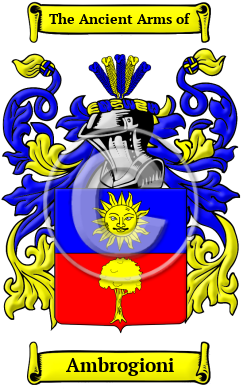 The surname Ambrogioni came from the name Ambrose, which was in turn derived from the Latin Ambrosius, which means immortal. The name Ambrose was extremely popular and spread rapidly because of devotion to Saint Ambrose, who lived during the 4th century and was one of the four Fathers of the Western Christian church. He was Governor of Liguria in northern Italy and became the Bishop of Milan in 374 even though he was not yet baptized. As bishop, St. Ambrose was a brilliant administrator and a courageous opponent of Arianism, which the Emperor Theodosius supported.

Early Origins of the Ambrogioni family

The surname Ambrogioni was first found in Bolgna (Latin: Bononia), the largest city and the capital of Emilia-Romagna Region. The famous University of Bologna was founded in the 11th century, by the 13th century the student body was nearly 10,000. Dante and Petrarch studied there. Tisso was tried there for 1564 for writing satirical poems. Bologna naturally, is famous for its sausages. But many noted scholars were born there. In those ancient times only persons of rank, the podesta, clergy, city officials, army officers, artists, landowners were entered into the records. To be recorded at this time was in itself a family honor.

Early History of the Ambrogioni family

This web page shows only a small excerpt of our Ambrogioni research. Another 119 words (8 lines of text) covering the years 1256, 1655, and 1735 are included under the topic Early Ambrogioni History in all our PDF Extended History products and printed products wherever possible.

More information is included under the topic Early Ambrogioni Notables in all our PDF Extended History products and printed products wherever possible.

Migration of the Ambrogioni family

Some of the first settlers of this family name or some of its variants were: Domingo Ambrosio who arrived in Boston, Massachusetts in 1820 at the age of 21.