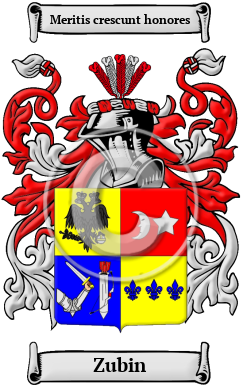 The name Zubin is a patronymic surname formed by adding one of the many Russian suffixes, such as "-ov" and "-ovic" to the personal name Zubak, or one of its diminished forms. This name may be derived from the Russian "zub," which means teeth. Perhaps the name was first born by someone having something odd or noticeable about his teeth.

Early Origins of the Zubin family

The surname Zubin was first found in Russia, where the name was born by members of the Zubov family who were counts of the Holy Roman Empire. Ilia and Afanasii Zubov, descendants of Zakharri, Vice-Regent of Vladimir in 1237, were granted land by Tsar Mikhail Feodorovich in return for demonstrated valor.

Early History of the Zubin family

More information is included under the topic Early Zubin Notables in all our PDF Extended History products and printed products wherever possible.

Migration of the Zubin family

Some of the first settlers of this family name or some of its variants were: no recorded listings of Zubov; however a Joseph Von Zuber came to America in 1854; and August Zuber arrived in Chile in 1885 with his wife Anna Breithaupt in 1885..