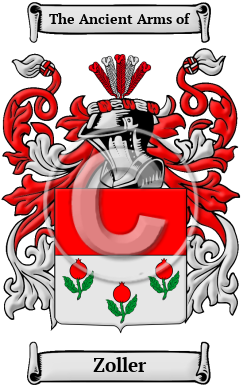 The Zoller family originated in Bavaria, Germany. As hereditary surnames were adopted in that area beginning in the 12th century, people were often identified by the kind of work they did. Zoller is an occupational name for a toll-taker or tax gatherer. The Zoller family became landed aristocrats and they resided in an elegant feudal manor on a vast estate in Bavaria.

Early Origins of the Zoller family

The surname Zoller was first found in Bavaria, where the name was anciently associated with the tribal conflicts of the area. They declared allegiances to many nobles and princes of early history, lending their support in struggles for power and status within the region. They branched into many houses in Austria and Switzerland, and their contributions were sought by many leaders in their quest for power. Chronicles first mention Eberhard Zollner of the town Eger on the border between Bavaria and Bohemia. Chronicles also mention Hartman der Zoller of Emmerdingen in 1392, and Johann Vryenstat der Czoellner of Liegnitz, Silesia in 1388.

Early History of the Zoller family

This web page shows only a small excerpt of our Zoller research. Another 136 words (10 lines of text) covering the years 1671, 1793, 1822, 1834, 1868, and 1882 are included under the topic Early Zoller History in all our PDF Extended History products and printed products wherever possible.

One can encounter great variation in the spelling of surnames: in early times, spelling in general, and thus the spelling of names was not yet standardized; and later, spellings would change with branching and movement of families. Variations of the name Zoller include Zoller, Zoll, Zoeller, Zollner, Zolner, Zoll, Zoellner and many more.

More information is included under the topic Early Zoller Notables in all our PDF Extended History products and printed products wherever possible.

In the United States, the name Zoller is the 14,700th most popular surname with an estimated 2,487 people with that name. [1]

Zoller migration to the United States +

Between the mid-17th and mid-20th centuries, German settlers arrived in North America by the thousands. Persecution based on religion and poverty were great motivators in this large-scale migration. So too was the opportunity for tenant farmers to own their own land. Ample land and opportunity awaited the settlers who went to such states as Pennsylvania, Texas, New York, Illinois, and California, as well as Ontario and the prairie provinces of Canada. Research into the origins of individual families in North America revealed records of the immigration of a number of people bearing the name Zoller or a variant listed above:

Zoller Settlers in United States in the 18th Century

Zoller Settlers in United States in the 19th Century

Zoller Settlers in United States in the 20th Century

Historic Events for the Zoller family +