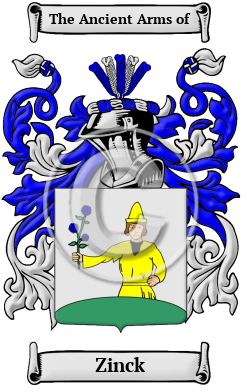 The name almost surely comes from the Middle High German word "zinke," meaning "a tip," or "point," but the reason that name was given is somewhat uncertain. There are three main possibilities and the most likely of these is that the name was given to someone who lived on a pointed piece of land, either a point of land by a body of water or a small, pointed hill. Another possibility is that is was a nickname for someone with a very pointy nose. The word "zinke" was also used for a cornet; so the name might have been given to someone who played that musical instrument.

Early Origins of the Zinck family

The surname Zinck was first found in Bavaria, where the name was closely identified in early medieval times with the feudal society which would become prominent throughout European history. The name would later emerge as a noble family with great influence, having many distinguished branches, and become noted for its involvement in social, economic and political affairs.

Early History of the Zinck family

This web page shows only a small excerpt of our Zinck research. Another 78 words (6 lines of text) are included under the topic Early Zinck History in all our PDF Extended History products and printed products wherever possible.

Spelling variations of this family name include: Zink, Zinke, Zincke, Zingg, Sink, Sinke, Synk and others.

More information is included under the topic Early Zinck Notables in all our PDF Extended History products and printed products wherever possible.

Zinck migration to the United States +

Zinck Settlers in United States in the 18th Century

Zinck Settlers in Canada in the 18th Century

Historic Events for the Zinck family +