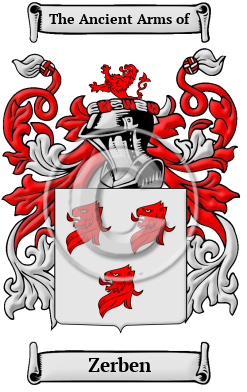 The roots of the distinguished German surname Zerben can be traced back to the region of Saxony. The name is derived from the place name "Zerben," a town near the city of Magdeburg, and would most likely have been initially borne by a resident of this area. Alternatively, the name may be derived from the Germanic "serbe," a term which refers to the Slav-speaking minority in Eastern Germany.

Early Origins of the Zerben family

The surname Zerben was first found in Zerben, where the name most likely originated. A surname deriving from a place of origin is often bestowed on someone who has moved from their native town; thus, it is probable that the initial bearer of the surname Zerben was a native of Zerben who had taken up residence in another town.

Early History of the Zerben family

This web page shows only a small excerpt of our Zerben research. Another 93 words (7 lines of text) are included under the topic Early Zerben History in all our PDF Extended History products and printed products wherever possible.

More information is included under the topic Early Zerben Notables in all our PDF Extended History products and printed products wherever possible.

Zerben migration to the United States +

Zerben Settlers in United States in the 18th Century