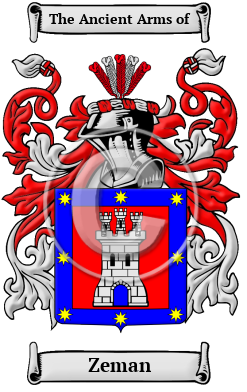 The surname Zeman comes from name of the city and province of Zamora, which is located on the Duero in northwest Spain. Because of its strategic position, the city was disputed during the Middle Ages, first between the Christians and Moors, then between the kingdoms of Leon and Castille.

Early Origins of the Zeman family

The surname Zeman was first found in the Basque province of Guipuzcoa, in north western Spain.

Early History of the Zeman family

This web page shows only a small excerpt of our Zeman research. Another 254 words (18 lines of text) covering the years 1542, 1623, 1770 and 1788 are included under the topic Early Zeman History in all our PDF Extended History products and printed products wherever possible.

Spelling variations of this family name include: Zamora, Zanora, Zamor, Samora, Zamaura, Zamore and others.

Prominent among members of the family were Rodrigo Zamorano (1542-1623), a cosmographer of the royal house of Philip II of Spain; Francesco de Zamora of Villafranca de Montes de Oca (Burgos), who was ennobled in 1770; and Juan Manuel de Zamora y Sainz...
Another 42 words (3 lines of text) are included under the topic Early Zeman Notables in all our PDF Extended History products and printed products wherever possible.

In the United States, the name Zeman is the 11,273rd most popular surname with an estimated 2,487 people with that name. [1]

Zeman migration to the United States +

Zeman Settlers in United States in the 18th Century

Zeman Settlers in United States in the 20th Century