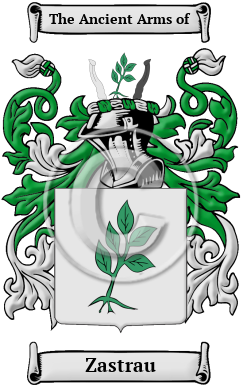 The roots of the distinguished surname Zastrau lie on the Baltic coast of Pomerania. The name is derived from "Zastrow," the name of a city in Pomerania, and was most likely originally borne by a resident of the city.

Early Origins of the Zastrau family

The surname Zastrau was first found in Pomerania, where it is believed to have emerged. During the Middle Ages, it was common practice for a new resident of a town to be identified by the name of his native city; thus, Zastrau may have been initially borne as a surname by someone who had migrated from Zastrow to another city. The earliest recorded bearer of the name was Conradus de Zasterow, who lived in Greifswald in 1270.

Early History of the Zastrau family

This web page shows only a small excerpt of our Zastrau research. Another 101 words (7 lines of text) covering the years 1594 and 1636 are included under the topic Early Zastrau History in all our PDF Extended History products and printed products wherever possible.

Spelling variations of this family name include: Zastrow, Zasterow, von Zastrow and others.

Another 32 words (2 lines of text) are included under the topic Early Zastrau Notables in all our PDF Extended History products and printed products wherever possible.

Migration of the Zastrau family

Some of the first settlers of this family name or some of its variants were: Martin Friedrich Zastrow and his wife Dorothea L. Bohlmann, "Old Lutherans" who emigrated from Pomerania to Pennsylvania in 1845; Julius Frenand Zastrow, who was naturalized in South Dakota in 1849.