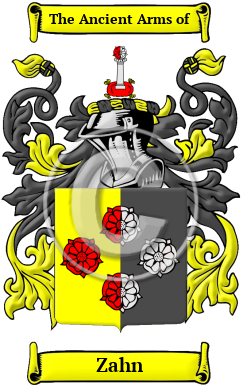 The German surname Zahn is derived from the Middle High German word "zan," which means "tooth." It is believed that the surname takes its origin from a nickname, most likely bestowed on the original bearer due to either a prominent tooth or a missing tooth.

Early Origins of the Zahn family

The surname Zahn was first found in the various regions of Germany and its neighboring countries in which the name first emerged. The earliest such instance dates back as far as 1179, when Chuonrad Zant was recorded to be living in Gurk, a village in the mountains that separate Austria and Germany.

Early History of the Zahn family

Spelling variations of this family name include: Zahn, Zan, Zant, Zandt, Zähnle, Czant and others.

Another 49 words (4 lines of text) are included under the topic Early Zahn Notables in all our PDF Extended History products and printed products wherever possible.

In the United States, the name Zahn is the 6,508th most popular surname with an estimated 4,974 people with that name. [1]

Zahn migration to the United States +

Zahn Settlers in United States in the 18th Century

Zahn Settlers in United States in the 19th Century

Zahn Settlers in United States in the 20th Century

Zahn Settlers in Canada in the 19th Century

Historic Events for the Zahn family +