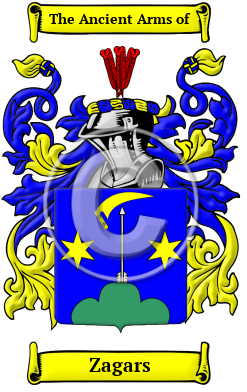 The roots of the distinguished German surname Zagars lie in the northern region of Pomerania. The name is derived from "Zager," the name of a town located near Wollin on the coast of the Baltic Sea.

Early Origins of the Zagars family

The surname Zagars was first found in Pomerania, where it was first recorded. The earliest known bearer of the name was Johann Zager, who was living in Stralsund in 1287. It was a common practice of the time to refer to a new resident of a city by the name of his hometown; thus, it is likely that the progenitor of the name was a native of Zager who had settled in another town. The young Zagars family was instrumental during this early period, playing a major role in the development of medieval Pomeranian society.

Early History of the Zagars family

This web page shows only a small excerpt of our Zagars research. Another 80 words (6 lines of text) covering the years 1287 and 1578 are included under the topic Early Zagars History in all our PDF Extended History products and printed products wherever possible.

Spelling variations of this family name include: Zager, Zäger, Zacker, Zagers, Zagar, Zagars and others.

More information is included under the topic Early Zagars Notables in all our PDF Extended History products and printed products wherever possible.

Migration of the Zagars family

Some of the first settlers of this family name or some of its variants were: Matheis Zager, who settled in Pennsylvania in 1752; Evert Zagers and his wife Roelofje Vrielink, who came to New York in 1846 with their son Hendrik, Friderike Zager, who immigrated to Iowa in 1862.