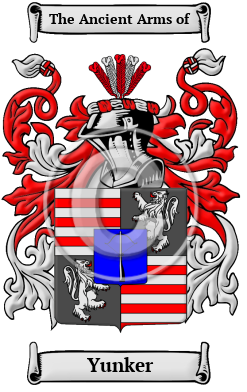 The roots of the distinguished German surname Yunker lie in the former duchy of Swabia. The name is derived from the Middle High German term "junc herre," which literally means "young gentleman;" however, the term was commonly applied to a man of gentle birth who was not yet ranked with the nobility, such as a young man who had not yet been knighted, or the son of a noble lady who had married a man of a lower class.

Early Origins of the Yunker family

The surname Yunker was first found in Swabia, where it is thought to have first emerged. The first known bearers of the name were Berhtoldus and Burchardus dicti Junkerer, who were burghers in Uberlingen in 1295. The young Yunker family became an integral part of that turbulent region as it emerged to form alliances with other families within the Feudal System and the nation, and played a major role in the development of medieval Swabian society.

Early History of the Yunker family

Another 36 words (3 lines of text) are included under the topic Early Yunker Notables in all our PDF Extended History products and printed products wherever possible.

In the United States, the name Yunker is the 12,111st most popular surname with an estimated 2,487 people with that name. [1]

Yunker migration to the United States +

Yunker Settlers in United States in the 19th Century