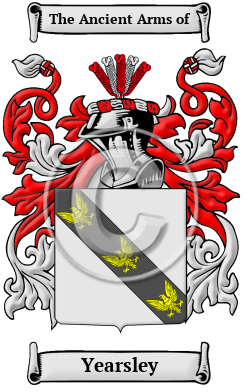 Early Origins of the Yearsley family

The surname Yearsley was first found in North Yorkshire at Yearsley, a township, in the parish of Coxwold, union of Easingwould, wapentake of Birdforth. [1] [2]

The place name dates back to the Domesday Book of 1086 when it was known as Eureslage. [3] Literally the place name means "wood or clearing of the wild boar, or of a man called Eofor." [4]

Early History of the Yearsley family

This web page shows only a small excerpt of our Yearsley research. Another 70 words (5 lines of text) covering the years 1455 and 1487 are included under the topic Early Yearsley History in all our PDF Extended History products and printed products wherever possible.

Spelling variations of this family name include: Yearly, Yearsly, Yearling, Earsley and others.

More information is included under the topic Early Yearsley Notables in all our PDF Extended History products and printed products wherever possible.

Yearsley migration to the United States +

Yearsley Settlers in United States in the 20th Century

Yearsley Settlers in Australia in the 19th Century

Historic Events for the Yearsley family +