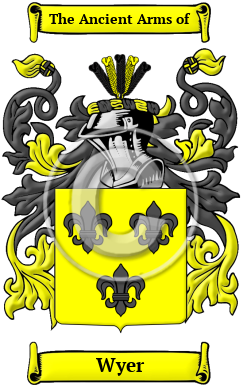 The surname Wyer has a few possible origins. The name may be toponymic, from a place name near which the original bearer lived or held land. Place names which could have inspired the surname Wyer could be Weier, Weiher, Wieren, and Weyer in Germany or Wierum in Holland. Or the surname could be locative, from a geographical feature near where the bearer resided. In either case, the name would be derived from the Middle German word "weiher" meaning "a pond or still water" or from the old German water-word "wir." The surname Wyer may also be patronymic, from the first name of the father of the initial bearer. In this case, the surname Wyer would come from the personal name Wigheri, stemming from "weihen" meaning "holy."

Early Origins of the Wyer family

The surname Wyer was first found in Westphalia, where the name emerged in mediaeval times as one of the notable families in the western region. From the 13th century onwards the surname was identified with the great social and economic evolution which made this territory a landmark contributor to the development of the nation. Haintz Weyer from Heudorf was recorded in Riedlingen in 1434, and Magdalena zum Weiher, widow of Erasmus zum Wiger, in Freiburg in 1572. A shoemaker named Martin Weyermann was mentioned in documents of 1644.

Early History of the Wyer family

Another 48 words (3 lines of text) are included under the topic Early Wyer Notables in all our PDF Extended History products and printed products wherever possible.

Wyer migration to the United States +

Wyer Settlers in United States in the 18th Century

Wyer Settlers in United States in the 19th Century

Wyer Settlers in Canada in the 18th Century

Wyer Settlers in Canada in the 19th Century

Wyer Settlers in Australia in the 19th Century

Wyer Settlers in New Zealand in the 19th Century