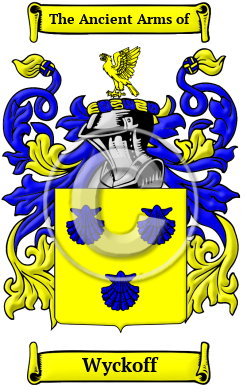 Early Origins of the Wyckoff family

The surname Wyckoff was first found in Holland, where the name became noted for its many branches in the region, each house acquiring a status and influence which was envied by the princes of the region. The name was first recorded in Utrecht, a city and capital of the province of Utrecht. The ramparts of this ancient city were destroyed in 1830. The Domkerk (1254) is on the site of the original church of St. Willibrord in 720. In the crypt are the hearts of Conrad II (1039) and Henry V (1125) two German Emperors. The Museum is notable for its relics and artifacts. Its tumultuous history was strongly influenced by religious conflict. In their later history the surname became a power unto themselves and were elevated to the ranks of nobility as they grew into this most influential family.

Early History of the Wyckoff family

From this era of Dutch history, those of this who distinguished themselves included Thomas Wijck (also Thomas Wijk, or Thomas Wyck) (1616-1677), a Dutch painter; and his son, Jan Wyck (also Jan Wiyck, or Jan Wick) (1652-1702), a Dutch Baroque painter. He was "a distinguished Dutch painter of interiors, markets, and Italian seaports, was born at Haarlem on 29 Oct. 1652. He was a pupil of...
Another 65 words (5 lines of text) are included under the topic Early Wyckoff Notables in all our PDF Extended History products and printed products wherever possible.

In the United States, the name Wyckoff is the 5,321st most popular surname with an estimated 4,974 people with that name. [1]

Wyckoff migration to the United States +

Wyckoff Settlers in United States in the 17th Century

Wyckoff Settlers in United States in the 19th Century

Wyckoff Settlers in United States in the 20th Century

Wyckoff Settlers in Canada in the 18th Century

Historic Events for the Wyckoff family +