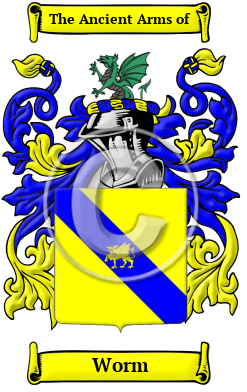 The name Worm can derive from either the German term "Würmchen" for a small mite, or from "Wurm" the Middle High German and Middle Low German word for snake or dragon. The surname may have originated from a nickname inspired by a physical attribute or character trait of the bearer. Or it may have been patronymic, derived from the personal name of the father. In this case the personal name would have been the Old Germanic "Wurm," a name rarely in usage today.

Early Origins of the Worm family

The surname Worm was first found in Germany. The name contributed greatly to the development of an emerging nation which would later play a large role in the tribal and national conflicts of the area. In later years the name branched into many houses, each playing a significant role in the local social and political affairs.The surname dates back to the 13th century in Württemberg, where Gumpold Wurm was recorded in 1232 and Heinrich dictus Wurm in 1296. In 1269, Johan dictus Worm (Vermis) resided in Hamburg. Hans Wurm was a tailor in 1491, and Wolfgang Worm was a resident of Guben in Saxony in 1530.

Early History of the Worm family

Another 42 words (3 lines of text) are included under the topic Early Worm Notables in all our PDF Extended History products and printed products wherever possible.

Worm migration to the United States +

Worm Settlers in United States in the 18th Century

Worm Settlers in United States in the 19th Century