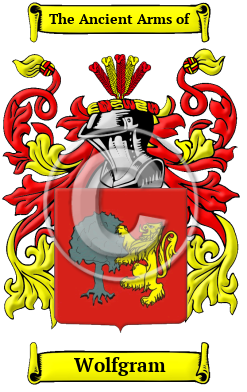 The surname Wolfgram was well-known in the Middle Ages as the name of Saint Wulfram Archbishop of Sens in France and missionary in Frisia in the 7th century. The name itself is derived from the Old German masculine personal name Wolfhraban, which stems from the Old High German word "wolf" meaning "wolf" and the Old High German word "hraban" meaning "raven." These two figures, the wolf and the raven, both played important roles in Germanic mythology, and so contributed to the popularity and meaning of the name. The surname Wolfgram was adopted probably as a patronym, that is, a name derived from the personal name of the father of the original bearer. The personal name Wolfram, is still in use today in German speaking countries, for example Wolfram Fiedler, who won two Olympic bronze medals for East Germany in luge, and Wolfram Waibel, who won an Olympic bronze medal for Switzerland in shooting in 1996. Interesting to note, "Wolfram" is also the German name for the chemical element tungsten.

Early Origins of the Wolfgram family

The surname Wolfgram was first found in Bavaria, where it was the name of the Bavarian knight and great German epic poet, Wolfram von Eschenbach (ca.1170-ca.1220,) the author of the Parzival epics. Other early mentions include Wolfram I., abbot of Hirsau around 1112, Wolfram Cziterwange of Glatz, recorded in 1332, Fritsche Wolfran of Wolfach, recorded in 1341, and Wolfram von Bamberg, a bishop in the 14th century. In 1364, Bertram Wolfram was listed as Wulfram Wolfrm and became a mayor in 1394. One named Wolfram or Woveramus was a knight of a religious order around 1300, as was Johann Wolfram in 1451. One named Wolfram, was an architect in 1424, Piotr Wolfram (d.1426,) a clergyman in Poland, Nikolaus Wolfram, a priest in Bayreuth around 1535, Johann Wolfram, a priest around 1560, Marcus Wolfram (d.ca.1591,) a wood carver, Veit or Vitus Wolfrum (1564-1626,) a priest and poet, Andreas Petrus Wolfrum (1590-1650,) a jurist, and Chritoph Wolfrum, a priest in Bayreuth around 1650.

Early History of the Wolfgram family

Spelling variations of this family name include: Wolfram, Wolfrum, Wolfrom, Wohlfromm, Wolfgram and many more.

Prominent among members of the name Wolfgram in this period include Gottfried Wolffram, a late 17th century amber and ivory carver, Sebastian Wolfrum (d.ca.1762), a lute maker, Gottlieb Wilhelm Alexander (Erdmann) Wolfram (1760-1828), a physicist and...
Another 35 words (2 lines of text) are included under the topic Early Wolfgram Notables in all our PDF Extended History products and printed products wherever possible.

In the United States, the name Wolfgram is the 11,924th most popular surname with an estimated 2,487 people with that name. [1]

Migration of the Wolfgram family

Some of the first settlers of this family name or some of its variants were: Adam Wolfram, Philipp Wolfram, August Wolfram, and Theodor Wolfram, who settled in North America after having served with the British as mercenary soldiers during the American Revolution. August Wolfram arrived in New York in 1837.