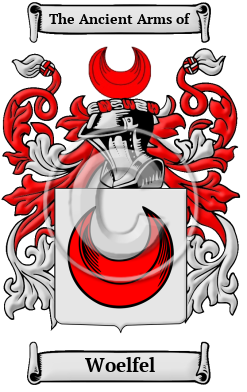 Early Origins of the Woelfel family

The surname Woelfel was first found in Swabia and Franconia, where the name appeared as early as the year 1136. Chronicles mention the brothers Eberhard and Otto von Wellenwarte members of a dynasty already long standing in the region. The ancestral castle lay in the Woernitz valley near Homburg, and the founder of the modern lines of the family is usually taken to be Georg I von Woellwarth (1366-1409). The older son of Georg founded the Fachsenfelder line, while the younger son founded the main branch known as the Lauterberger line. They contributed greatly to the development of an emerging nation which would later play a large role in the tribal and national conflicts of the area. In later years the name branched into even more houses, each playing a significant role in the local social and political affairs.

Early History of the Woelfel family

This web page shows only a small excerpt of our Woelfel research. Another 165 words (12 lines of text) covering the years 1746, 1800, 1802, 1810, and 1867 are included under the topic Early Woelfel History in all our PDF Extended History products and printed products wherever possible.

Another 30 words (2 lines of text) are included under the topic Early Woelfel Notables in all our PDF Extended History products and printed products wherever possible.

Woelfel migration to the United States +

Woelfel Settlers in United States in the 19th Century