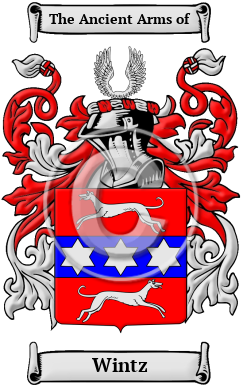 The surname Wintz is a patronymic surname; that is, it is derived from the personal name of the original bearer. Patronymic surnames arose out of the vernacular and religious given name traditions. The vernacular or regional naming tradition is the oldest and most pervasive type of patronymic surname. According to this custom, names were originally composed of vocabulary elements from the local language. Vernacular names that were derived from ancient Germanic personal names have cognates in most European languages. For example, the court of Charlemagne (742-814) was Christian and Latin-speaking, but the Frankish dialect of Old German was commonly used for personal names. Vernacular names were also widespread in Germany. As a result, many typical English and French names are of Germanic origin and have cognates in other European languages. In this instance, the surname is derived from the given name Wenzel, a diminutive of the German name Wenze. This personal name is related to the Hungarian name Wenceslas, the 10th century saint immortalized in the Christmas carol Good King Wenceslas.

Early Origins of the Wintz family

Early History of the Wintz family

This web page shows only a small excerpt of our Wintz research. Another 82 words (6 lines of text) covering the years 1578, 1769, 1856 and 1868 are included under the topic Early Wintz History in all our PDF Extended History products and printed products wherever possible.

More information is included under the topic Early Wintz Notables in all our PDF Extended History products and printed products wherever possible.

Wintz migration to the United States +

Wintz Settlers in United States in the 18th Century