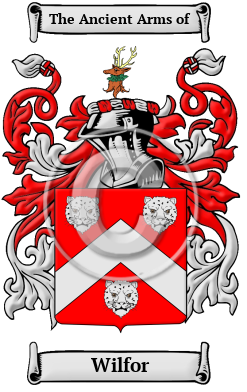 The Norman Conquest of England in 1066 added many new elements to an already vibrant culture. Among these were thousands of new names. The Wilfor family lived in Nottinghamshire, at Wilford. This placename is derived from the name Norman-French name Will, a pet form of William and the word ford, meaning a river crossing, and indicates that the ford in question belonged to William.

Early Origins of the Wilfor family

The surname Wilfor was first found in Nottinghamshire at Wilford (also known as Wilfrids Ford) a parish and village in the union of Basford, in the north division of the wapentake of Rushcliffe.

The village dates back to at least the Domesday Book when it was listed as Wilesford [1] and literally meant "willow-tree ford," from the Old English words "wilig" + "ford." [2] At that time, the land was held William Peverel, a Norman Baron, who was granted the fishery in the district of Clifton. Wilford House was built by Henry Smith, Esq. in 1828. [3]

Saint Wilfrid or Wilfrith (634-709), was Bishop of York, the son of a Northumbrian thegn. "In his fourteenth year he was a handsome and well-mannered lad, fond of arms, horses, and fine clothes, but he was not happy, for he had an unkind stepmother, and he wished to enter a monastery. His father sent him to the court of Oswy [q. v.], where he pleased the queen, Eanflaed. After spending a year in Kent he left England in 653 in company with Benedict Biscop. " [4]

Wulfred (d. 832), was Archbishop of Canterbury and "first appears as Archdeacon under Archbishop Ethelhard. He had large estates in Kent, and was probably a Kentish man. " [4]

Early History of the Wilfor family

Norman surnames are characterized by a multitude of spelling variations. The frequent changes in surnames are largely due to the fact that the Old and Middle English languages lacked definite spelling rules. The introduction of Norman French to England, as well as the official court languages of Latin and French, also had pronounced influences on the spelling of surnames. Since medieval scribes and church officials recorded names as they sounded, rather than adhering to any specific spelling rules, it was common to find the same individual referred to with different spellings. The name has been spelled Wilfoord, Williford, Wilfort, Wilford and others.

Outstanding amongst the family at this time was John Wilford (died 1418) English politician from Exeter, Devon who represented Exeter in April 1414 and November 1414. His brother, William Wilford (died 1413), was also an English politician for Exeter in 1395, January 1397, September 1397, January 1404 and 1411. Ralph Wulford or Wilford (1479?-1499), was and English pretender, born about 1479, is described in 'Fabyan's Chronicle' as son of a cordwainer in London, and he was not improbably a member of the London and Kent family of Wilford. He was made to personate the Earl of Warwick, eldest son of Edward IV's...
Another 130 words (9 lines of text) are included under the topic Early Wilfor Notables in all our PDF Extended History products and printed products wherever possible.

Migration of the Wilfor family

Many English families emigrated to North American colonies in order to escape the political chaos in Britain at this time. Unfortunately, many English families made the trip to the New World under extremely harsh conditions. Overcrowding on the ships caused the majority of the immigrants to arrive diseased, famished, and destitute from the long journey across the stormy Atlantic. Despite these hardships, many of the families prospered and went on to make invaluable contributions to the development of the cultures of the United States and Canada. Early North American immigration records have revealed a number of people bearing the name Wilfor or a variant listed above: Joseph and Hannah Wilford arrived in New England in 1766; Eleanor Wilford and her husband arrived in Maryland in 1733. Joh Wilfort arrived in Philadelphia in 1849..