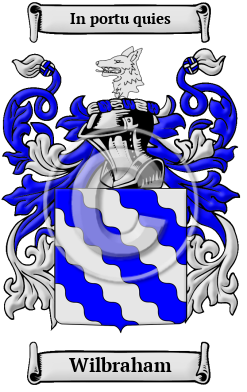 Early Origins of the Wilbraham family

The surname Wilbraham was first found in Cheshire where they were descended from Sir Richard Wilburgham who was Lord of Wymincham, the Sheriff of Chester. Many of the family were found in the township of Fadiley in the union and hundred of Nantwich. "This place was anciently esteemed an appendage of the manor of Baddiley, but the owners of Woodhey here had, at an early period, a manor which became vested in the earls of Dysart, by the marriage of the coheiress of Sir Thomas Wilbraham with Lionel, Lord Huntingtower, in 1680. A domestic chapel was built at Woodhey by the relict of Sir Thomas Wilbraham, who, in 1703, endowed it with a rent-charge of £25. " [1]

Early History of the Wilbraham family

Spelling variations of this family name include: Wilbraham, Wilburgham, Willbraham and others.

Wilbraham migration to the United States +

Wilbraham Settlers in United States in the 19th Century

Wilbraham Settlers in Australia in the 19th Century

Wilbraham Settlers in West Indies in the 17th Century

Motto: In portu quies
Motto Translation: There is rest in port.