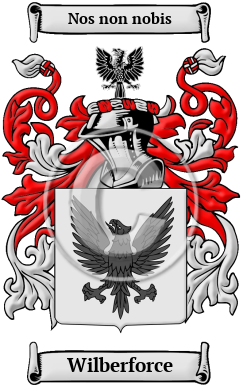 The name Wilberforce reached England in the great wave of migration following the Norman Conquest of 1066. The Wilberforce family lived in Yorkshire, at Wilberfosse.

Early Origins of the Wilberforce family

The surname Wilberforce was first found in Yorkshire where they were Lords of the manor of Wilberforce, and descended from Phillip of Kyme, Lord of Wilberfosse. The parish of Wilberfoss(e) in the East Riding of Yorkshire was home to the family. "This place, from the time of the Conquest, was the property of the Wilberforce family, from which was descended the late William Wilberforce, the distinguished philanthropist; but the ancient family mansion and the estates were sold in 1710, and the lands are now divided among several proprietors, of whom Col. Wyndham is lord of the manor." [1]

Early History of the Wilberforce family

This web page shows only a small excerpt of our Wilberforce research. Another 109 words (8 lines of text) covering the years 1797 and 1833 are included under the topic Early Wilberforce History in all our PDF Extended History products and printed products wherever possible.

Before the advent of the printing press and the first dictionaries, the English language was not standardized. Sound was what guided spelling in the Middle Ages, so one person's name was often recorded under several variations during a single lifetime. Spelling variations were common, even among the names of the most literate people. Known variations of the Wilberforce family name include Wilberforce, Wilberfoss, Wilberfosse and many more.

More information is included under the topic Early Wilberforce Notables in all our PDF Extended History products and printed products wherever possible.

Wilberforce Settlers in Australia in the 19th Century

Motto: Nos non nobis
Motto Translation: We not for ourselves.