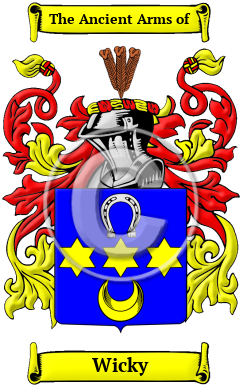 Early Origins of the Wicky family

The surname Wicky was first found in Lemberg(Lwow,) a province of Poland. It is bounded by Lublin, Cracow, Tarnopol and Stanislawow. The main cities are those of Lemberg, Prezymysl, Drohobycz, Rzeszow, Jaraslow, Sambor and Sanock. The town of Lemberg was an important trading post with the east. While Polish represents the majority of its peoples there is also a major Ukrainian representation. The surname became noted for its many branches in the region, each house acquiring a status and influence which was envied by the princes of the region. In their later history the name became a power unto themselves and were elevated to the ranks of nobility as they grew into this most influential family.

Early History of the Wicky family

This web page shows only a small excerpt of our Wicky research. Another 102 words (7 lines of text) covering the years 1600, 1621, 1643, 1696, and 1793 are included under the topic Early Wicky History in all our PDF Extended History products and printed products wherever possible.

More information is included under the topic Early Wicky Notables in all our PDF Extended History products and printed products wherever possible.

Migration of the Wicky family

Some of the first settlers of this family name or some of its variants were: August Wickie, who was living in Ontario in 1871; Stanislaus Wieczkowski, who was recorded as a resident of Pennsylvania in 1890; Josef Wietecki, who came to Baltimore on the SS Hannover in 1909.