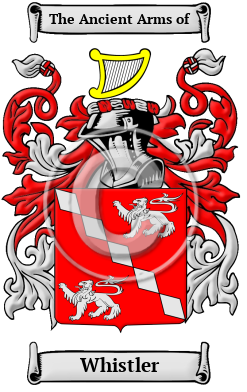 Early Origins of the Whistler family

The surname Whistler was first found in Somerset where Osbert le Wistler was listed in the Assize Rolls of 1243. [1]

Early History of the Whistler family

Distinguished members of the family include Daniel Whistler (1619-1684), an English physician of Elvington, Oxfordshire, Gresham Professor of Geometry (1648), President of the College of Physicians (1683.) He was the son of William Whistler of Elvington, Oxfordshire, and was born at Walthamstow in Essex. "On 13 June 1648 he was elected professor of geometry at Gresham College, and was at the same time Linacre reader at Oxford. He took care of wounded seamen in the Dutch war of 1652, and in October 1653 was desired to accompany...
Another 87 words (6 lines of text) are included under the topic Early Whistler Notables in all our PDF Extended History products and printed products wherever possible.

In the United States, the name Whistler is the 17,490th most popular surname with an estimated 2,487 people with that name. [7]

Whistler migration to the United States +

Whistler Settlers in United States in the 18th Century

Whistler Settlers in Australia in the 19th Century

Whistler Settlers in New Zealand in the 19th Century