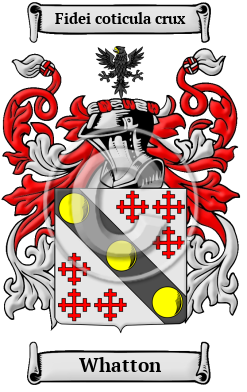 Whatton is a name that was brought to England by the ancestors of the Whatton family when they migrated to the region after the Norman Conquest in 1066. The Whatton family lived in Nottingham, at Whatton. The name of this town derives from the Old English words hvaete, meaning wheat, and tun, meaning settlement or enclosure. [1]

Early Origins of the Whatton family

The surname Whatton was first found in Nottingham where a Norman noble, Robert de Watone, the youngest son of Gaitier de Tirell, Seigneur de Poix in Picardy, was granted the Lordship of Wattone in the Vale in that shire, and it was shown in the Domesday Survey of 1086. [2]

Today, there are numerous places in Britain by the name Watton: Watton, Devon; Watton, East Riding of Yorkshire; Watton, Norfolk; and Watton-at-Stone, Hertfordshire.

Early History of the Whatton family

This web page shows only a small excerpt of our Whatton research. Another 121 words (9 lines of text) are included under the topic Early Whatton History in all our PDF Extended History products and printed products wherever possible.

Spelling variations in names were a common occurrence in the eras before English spelling was standardized a few hundred years ago. In the Middle Ages, even the literate regularly changed the spellings of their names as the English language incorporated elements of French, Latin, and other European languages. Many variations of the name Whatton have been found, including Wattone, Watone, Wathon, Watton, Watten, Wattan, Whattone, Whatone, Whathon and many more.

More information is included under the topic Early Whatton Notables in all our PDF Extended History products and printed products wherever possible.

Whatton Settlers in New Zealand in the 19th Century