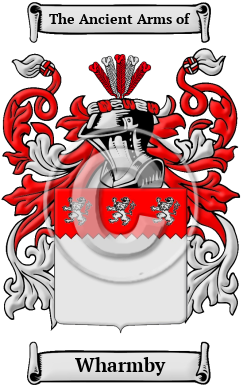 Early Origins of the Wharmby family

The surname Wharmby was first found in Yorkshire where the first on record was Henry de Wermelai witnesses Humphrey de Bohun's charter to Farley Priory, Wilts; and Helias de Winelai the foundation charter of Kirkley Priory in Yorkshire. [1]

Another source claims the name is from "Wharmby, some small spot, seemingly in East Cheshire, in the vicinity of Stockport." [2]

This same source claims the name could be from "Querenby, now Quarnby, in the parish of Huddersfield, Yorkshire. [2]

In this latter case, the surname is conjecturally descended from the tenant of the lands of Quarmby, held by Ilbert de Lacy, a Norman Braon who was recorded in the Domesday Book census of 1086. [3]

One of the sources of confusion is that early records show Willelmus de Querenby in the Yorkshire Poll Tax Rolls of 1379 and Alexander de Quernby in East Cheshire in 1437.

Early History of the Wharmby family

This web page shows only a small excerpt of our Wharmby research. Another 83 words (6 lines of text) covering the years 1219, 1580, 1592 and 1602 are included under the topic Early Wharmby History in all our PDF Extended History products and printed products wherever possible.

More information is included under the topic Early Wharmby Notables in all our PDF Extended History products and printed products wherever possible.

Wharmby migration to the United States +

Wharmby Settlers in United States in the 17th Century

Wharmby Settlers in Australia in the 19th Century