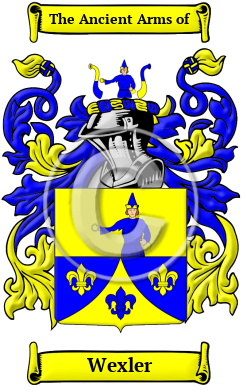 The roots of the distinguished German surname Wexler can be traced back to the state of Bavaria. The name is derived from the Low German word "Wesseler," meaning "money changer." It was likely bestowed as an occupational name upon the original bearer, who passed it down to his descendants as a surname.

Early Origins of the Wexler family

The surname Wexler was first found in the town of Eger, where the earliest records of the name have been found. The first recorded bearer of the name was Hans der Wechsler, who lived there in 1384. The young Wexler family was instrumental during this early period, playing an important role in the development of the society of the region.

Early History of the Wexler family

This web page shows only a small excerpt of our Wexler research. Another 122 words (9 lines of text) covering the years 1395, 1565, 1569, and 1829 are included under the topic Early Wexler History in all our PDF Extended History products and printed products wherever possible.

Spelling variations of this family name include: Wexler, Wechsler, Wesseler and others.

Another 34 words (2 lines of text) are included under the topic Early Wexler Notables in all our PDF Extended History products and printed products wherever possible.

In the United States, the name Wexler is the 7,504th most popular surname with an estimated 2,487 people with that name. [1]

Wexler migration to the United States +

Wexler Settlers in United States in the 18th Century

Wexler Settlers in United States in the 19th Century

Wexler Settlers in United States in the 20th Century

Historic Events for the Wexler family +