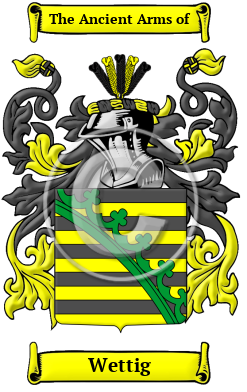 The family name Wettig comes from the name of the town of Wettin, located in the district of Saalekreis in the Bundesland of Saxony-Anhalt, Germany.

Early Origins of the Wettig family

The surname Wettig was first found in Saxony. The House of Wettin was a dynasty of German Counts, Dukes, Prince-electors and Kings that ruled the area of today's German state of Saxony for over 800 years, as well as holding at times the kingship of Poland. The oldest ancestor of the House of Wettin is said to be Thiedericus (died 982,) who was probably based in the Liesgau (located at the western edge of the Harz). Around the year 1000, during Germanic conquests of Slavic territory, this family acquired Wettin Castle, after which they named themselves. Wettin Castle is located in Wettin in the Hosgau on the Saale River.

Early History of the Wettig family

Prominent bearers of the family name Wettig at this time were Royal members of the House of Wettin, such as: Frederick IV "the Belligerent" (1370-1428), Margrave of Meissen, Landgrave of Thuringia and Elector of Saxony; Albert "the Bold" (1443-1500), Duke of Saxony, founder of the Albertine line of the House of Wettin; Johan Frederick I (1503-1554) "John the...
Another 58 words (4 lines of text) are included under the topic Early Wettig Notables in all our PDF Extended History products and printed products wherever possible.

Wettig migration to the United States +

Wettig Settlers in United States in the 19th Century